The African Leopard (Panthera pardus pardus) is one of Africa’s most distinguishable big cats. As the leopard has such a broad geographical range combined with its cryptic activities there is a limited amount of empirical evidence that exists which in turn can be applied to adaptive management strategies, through practical conservation methods and monitoring across Namibia and Southern Africa.

As a result of the limited coverage, lack of empirical evidence regarding the Namibian leopard populations, distribution and population dynamics the ability to determine long-term conservation strategies and effective monitoring has been limited. The leopard is highly adaptable and can utilise human dominated environments successfully compared to other large carnivores. However, leopards are under pressure across their range from habitat loss and fragmentation, reduced wild prey availability, and conflict with farmers due to livestock predation and retribution killing. A global human-wildlife conflict study found that the leopard is the leading carnivore conflict species as it featured in the greatest number of human-wildlife conflict case studies. This pattern can be found across Namibia with both freehold and communal farms reporting losses of livestock and game to leopards. In addition, freehold farmers claim that they have noticed a continual increase in leopard numbers on their farms in tandem to an increase in conflict cases. This situation has been exacerbated by the severe drought that occurred in Namibia from 2015 to 2017 with vast areas of the country yet to fully recover from the effects. As conflict increases so does the number of leopards labelled as problem animals, indiscriminate of age or sex, being removed from the farmland and in turn the national population. However, a high proportion of the leopards removed are not reported to the authorities, therefore the level of removal is currently unknown. The long-term sustainability of the leopard population in Namibia relies upon the understanding of all the highly complex dynamic pressures placed on the species and in turn creating viable and effective monitoring systems. 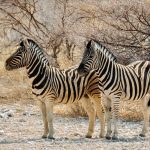